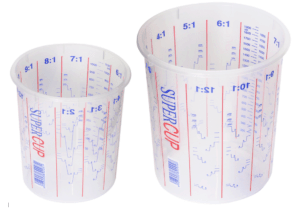 These re-usable, calibrated mixing cups are ideal for mixing GlassCast epoxy resins that require a mix ratio by volume – such as GlassCast 10 and GlassCast 50. Even when weighing your resin out, they are still a handy reusable pot for mixing resin.

These reusable, calibrated mixing cups are ideal for mixing GlassCast epoxy resins that require a mix ratio by volume – such as the GlassCast 10 and GlassCast 50. Even when weighing your resin out, they are still a handy reusable pot for mixing resin.

The mixing cups are made from polypropylene which means that epoxy resin will not stick to them and they feature square corners which are better for thorough mixing.

The cups are available in two sizes; 1300ml and 2240ml. To allow plenty of room for mixing we suggest batches of around 1kg in the 1300ml cup and 2kg in the 2240ml cup. Choose the size you require from the drop-down list at the top of the page.

The calibration marks shown on the cup can be used to get accurate ratios of resin to hardener when using ratios provided in parts by volume. It should be noted that these calibrated ratios should NOT be used when you are using a parts by weight ratio where scales should be used instead.

We suggest using the calibrated ratios on the mixing cups for resins where the easiest mix ratio is given in parts-by-volume, such as GlassCast 10 or GlassCast 50 which use a 2:1 by volume mix ratio.

To use the calibration in this way, locate the markings on the cup which relate to a 2:1 mix ratio. You will see a number of stepped lines which run from ‘A’ to ‘B’. To measure resin and hardener at a 2:1 mix ratio, simply fill the cup with resin to the bottom ‘A’ mark on one of these lines and then add hardener until you reach the top ‘B’ mark on the same line. Simple!

Because these calibrated mixing cups are made from non-stick polypropylene, in many cases the easiest way to clear them is to allow the resin to cure fully and then remove it in one from the cup. Please note that although the cups can be re-used in this way, they are only thin-walled and so occasional breakages should be expected.

This website uses cookies to improve your experience while you navigate through the website. Out of these cookies, the cookies that are categorized as necessary are stored on your browser as they are essential for the working of basic functionalities of the website. We also use third-party cookies that help us analyze and understand how you use this website. These cookies will be stored in your browser only with your consent. You also have the option to opt-out of these cookies. But opting out of some of these cookies may have an effect on your browsing experience.
Necessary Always Enabled
Necessary cookies are absolutely essential for the website to function properly. This category only includes cookies that ensures basic functionalities and security features of the website. These cookies do not store any personal information.
Non-necessary
Any cookies that may not be particularly necessary for the website to function and is used specifically to collect user personal data via analytics, ads, other embedded contents are termed as non-necessary cookies. It is mandatory to procure user consent prior to running these cookies on your website.
SAVE & ACCEPT