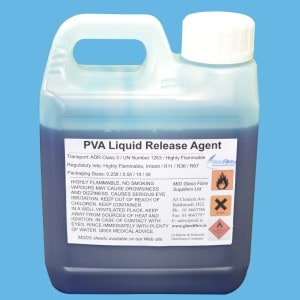 PVA (polyvinyl alcohol) is a water-based liquid plastic that can be applied to waxed moulds to prevent moulded parts from sticking. PVA is not always required. Often laminators rely solely on mould release wax to create a surface contaminant on the mould that allows parts to be removed. However, on complicated moulds and on new moulds, when the risk of a part sticking in a mould is greatest, PVA can be applied over a waxed mould. For General Health Information see section on hazards.